Devil, a Belgian Shepherd, holds a distinguished record of service detecting enemy positions and equipment on operations in Afghanistan, with the Special Air Service Regiment (SASR).
Devil was shot during his second tour by an insurgent on July 2, 2012 during the same mission in which SASR's SGT Blaine Diddams was killed.

During the mission, Devil provided early warning of an enemy fighting position.

A firefight ensued between the SOTG patrol and the insurgents, during which Devil was targeted by an insurgent at close range and killed instantly by small-arms fire. 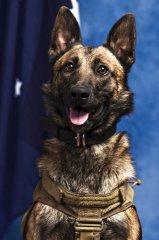